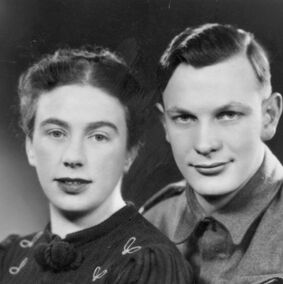 The Dan Davin Story
Daniel Marcus Davin was born in Invercargill in 1913, fourth of six children of Irish Catholic parents. Growing up in Gore and Invercargill, he won a national scholarship to Otago University, where he studied History, English, French and Latin.

It was here, he met his future wife Winnie Gonley, who was doing her MA in English Literature. Davin immersed himself in literary and linguistic study. His first published work appeared in the student newspaper The Critic and the Otago University Review. His writing career was advanced by winning a Rhodes Scholarship to Balliol College, Oxford, where he wrote his first novel.

On the outbreak of war, Davin joined the British Army and was assigned to the Royal Warwickshire Regiment. After training in Aldershot, he applied for a transfer to the Second New Zealand Expeditionary Force and took up his commission as a second lieutenant with the 23rd Battalion at Mytchett, Surrey, on 20 July 1940. War took him on a Mediterranean odyssey: to Greece in the spring of 1941, where he saw action on Mt Olympus, and then to Crete, where he was wounded in action and evacuated to Egypt.

When the War was over, Davin took a job at Oxford University Press and spent the rest of his working life (1945–78) there, rising from lowly editor to Academic Publisher. He continued writing, expanding his range to include criticism with An Introduction to English Literature (1947, with John Mulgan) and reviews for the BBC, the fledgling journal Landfall, the Review of English Studies and TLS. His war novel For the Rest of Our Lives (1947), and a novel in which he drew profoundly on his experiences as a boy and young man in Southland, Roads from Home (1949), drew critical attention, and fostered high expectations.

​His subsequent novels were a disappointment, however, to himself and to critics. The Sullen Bell (1956), No Remittance (1959), Not Here, Not Now (1970) and Brides of Price (1972) nonetheless found an audience in New Zealand. A second volume of short stories, Breathing Spaces (1975), collected pieces from the 1950s–60s, many first published in Landfall. He visited New Zealand in 1978, taking part in the Victoria University Seminar on the New Zealand Short Story, in ‘conversation’ with James Bertram. Dan Davin died at his home in Oxford on 28 September 1990. He was survived by Winnie and their three daughters.